Apple has recently patented an unusual method for dealing with the much-maligned “notch” that contains its front-facing camera. Rather than use a system that places the camera under the display, Apple instead has designed a moving “window” that can open to reveal a camera behind it.

As noted by Patently Apple, the expandable display that scrolls open thanks to a motor hidden under the display is shown as hiding the camera area and notch when it is not in use. Apple describes it as a window region that overlaps on a movable portion of the display. When closed, the moving portion overlaps the window and the pixels in the moving display can act as if they were part of the complete display panel. When open, the moving portion is lifted away from the display so that the optical component can pass through without obstruction.

One image included with the patent shows a small cog located under the display that turns an arched, geared piece that is connected to a folding section of the display. When opened, the camera can peek through the opening and allow it to gain an unobstructed view. 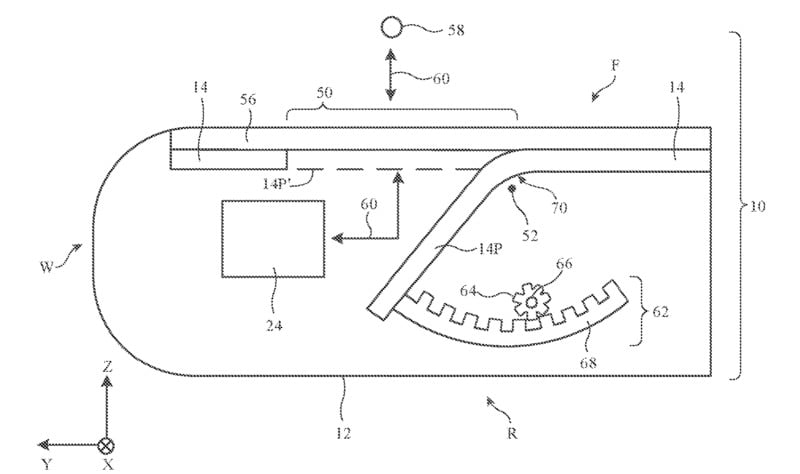 The patent also describes a “rolling” display window that uses the same concept, but instead of relying on a hinge, the display is “rolled” back to reveal the camera. 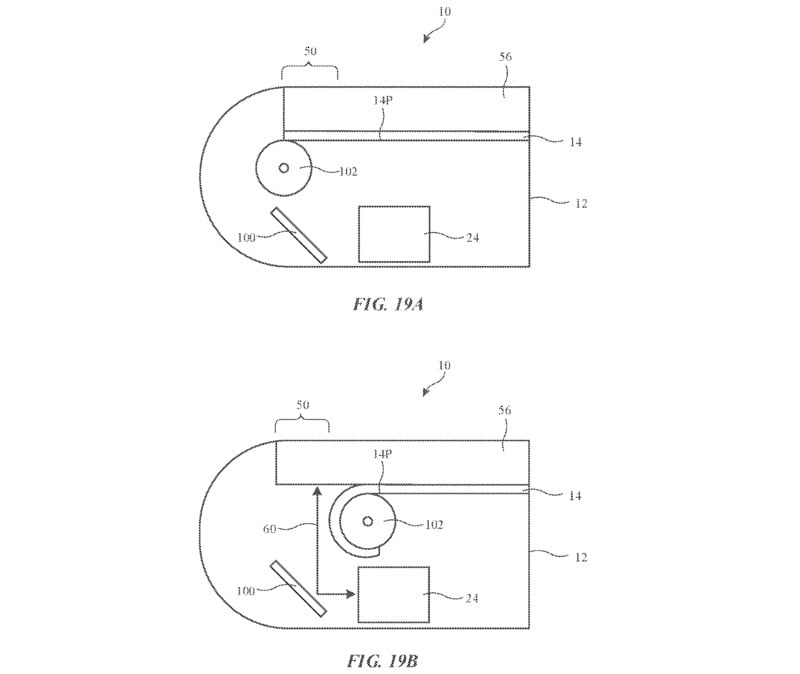 Whether it is a hinged flap or a flexible roll, Apple seems to want to avoid having its cameras look directly through a display screen so that image quality can be its best.

As PetaPixel has covered in the past, multiple companies in the mobile space are working on a solution to the problem of the notch or hole-punch for a front-facing camera that will interrupt an otherwise edge-to-edge display. Under-display cameras appear to be the most popular choice, as both ZTE and Samsung have released consumer products that feature the tech.

Unfortunately, under-display cameras have their downsides. Because the camera is under a panel, the camera is physically encumbered by the pixels which can be visible in the image, especially in backlit conditions. Images also tend to be quite soft. Samsung’s recently announced Galaxy Z Fold 3 does exhibit this issue, but it is strongly mitigated by heavy post-processing that seems to help fix the problem in several possible use cases, though it’s still noticeable.

Both Xiaomi and Oppo have introduced solutions to this problem as well, and each claims to have solved the main issues with under-display technology. Xiaomi recently announced the Mix 4 which will feature the tech, and Oppo showed off its prototype solution as well. Both promise to be hugely improved over what Samsung and ZTE both have attempted.

Another issue with under-display cameras is that the pixels over the camera itself appear imperfect. Google has attempted its own design that will use a second OLED screen under the main screen along with a prism that it believes will help alleviate this issue.

Even though all these other companies have different methods for addressing the same situation, they all have one thing in common: few to no moving parts. Apple appears to be willing to risk the implementation of physical moving gear that directly bends the display, which is notable. Not only do moving parts mean more places that could break, but it also means that the device will take at least a bit of time to prepare itself to take a photo or video.

If Apple does ever use this patent, it likely won’t be for some time. The Silicon Valley giant is known for playing the long game and being the last to add new technology into its devices. Under-display tech is still so new that Apple is unlikely to take a risk on anything unless it is far more proven, unlike Samsung, Xiaomi, or Oppo who enjoy positions as testers of bleeding-edge technology.

Apple’s full patent can be viewed on the U.S. Patent Office’s website.

How to Fix Sitting Posing Mistakes